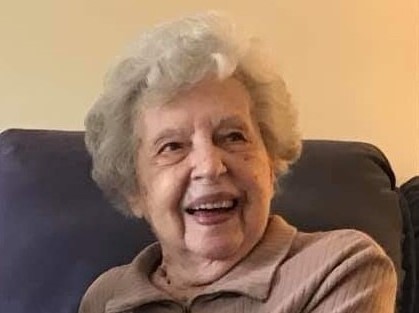 Rita was a devout Catholic her entire life and was a parishioner of Immaculate Conception Church in Somerville.  She was also an avid fan of the New York Mets and the Giants.  Her great sense of humor saw her through many dismal sports seasons, but her greatest joy was the time that she spent with her family.

She was preceded in death by her beloved husband William, and her oldest son William Francis.  They are reunited again.

She was loved by her four children, William, Michael and his wife Aida, Paul and Mary.

Rita, affectionately known as “Nanny”, also had eight grandchildren – Maureen, Meghan, William, Nicholas, Julie, Patrick, Erin and Sean, as well as ten great-grandchildren.  She will be missed any honored by many.  Her loss will be a huge void, but her family was blessed to have shared many wonderful memories with her.

Rita is also survived by her sister-in-law Anette Kaicher, as well as many loving nieces and nephews.

A private graveside service was held at Neshanic Cemetery on April 18, 2020.

To leave a condolence, you can first sign into Facebook or fill out the below form with your name and email. [fbl_login_button redirect="https://cuocofuneralandcremation.com/obituary/rita-ann-slattery/?modal=light-candle" hide_if_logged="" size="medium" type="login_with" show_face="true"]
×