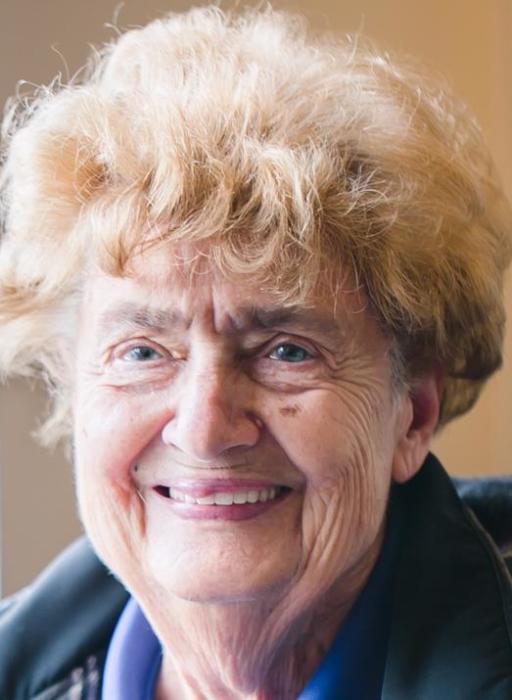 Dr. Judith H. Ambrus passed away on Friday, December 27, 2019. She was an accomplished civil servant and a loving mother and grandmother.

Judith was born in Budapest, Hungary on May 22, 1931. She grew up amidst the chaos of World War II and later the oppression of Soviet occupation.  In 1954, she graduated from Eötvös-Loránd University in Budapest with a degree in Chemistry and Physics. That same year, she married her husband Zoltan G. Ambrus, an electrical engineer. Soon after they were married, Judith gave birth to her only son.

In 1956, Judith’s husband Zoltan took an active role in the Hungarian Revolution. When it became clear that the Revolution would not succeed, fearing for their own safety, Judith, Zoltan, and their young son were forced to hastily flee the country. After several months waiting in a refugee camp, they were denied entry into the United States, and the family instead moved to Johannesburg, South Africa. In Johannesburg, Judith worked as a chemist for the South African Railroad. Finally, in 1960, as part of a National Academy of Sciences program, Judith and her husband and son were welcomed to the United States. Judith quickly secured a job teaching Physics at Georgetown Visitation School in Washington, DC while Zoltan worked as an engineer for the Potomac Electric Power Company (PEPCO) attending graduate school in the evenings at Catholic University.

Tragically, in 1965, Zoltan suffered a fatal heart attack, leaving Judith widowed at age 34 with a 10-year old son. Subsequently, she began work as a Research Chemist for the Naval Ordinance Laboratory. While working, she obtained an M.S. and then a Ph.D. in Physical Chemistry from the University of Maryland at College Park in 1970. She would go on to work as a civilian in the Navy for twenty years as a research chemist eventually leading the Electrochemistry Branch of Applied and Basic research.  She authored numerous technical articles and received patents related to the development of lithium batteries. She also served as chair of the local branch of the Electrochemical Society.

In 1985, Judith joined NASA (National Aeronautics and Space Administration) and served as a program manager for chemical and thermal energy conversion in the Office of Aeronautics and Space Technology. In this capacity she managed all NASA sponsored research and technology activities, including initiation and management of the tri-agency space nuclear reactor program, which involved the Departments of Energy and Defense along with NASA.  She later served as Assistant Director for Technology and Development, managing planning of technology and commercial research development for the International Space Station.

After retirement in 1996, Judith consulted for Space Technology Management Services.  She also explored her other interests, volunteering for the Smithsonian in Washington D.C. as a docent and later leading history-themed excursions. She moved to Bridgewater, New Jersey in 1997 to be closer to her family and began volunteering for the Cooper-Hewitt Museum of Design in New York City as a weekend docent tour guide. Additionally, she was active in the Bridgewater Woman’s Club, eventually serving as President of the Club. Later, she volunteered with the New Jersey State Federation of Woman’s Clubs and served on the executive board. She was honored in 2006 as a Woman of Achievement for distinguished service.

Although she was incredibly accomplished, Judith’s primary focus was always her family. Along with all her volunteerism, she enjoyed travelling and took her grandchildren on many educational trips. She will be most remembered for her love, her kindness and her generosity. Judith leaves behind her son, Zoltan Ambrus, his wife Mary Lou Ambrus, three grandchildren Megan Ambrus Akkina, Patrick Ambrus, Ryan Ambrus, and one great granddaughter, Georgina Ambrus Akkina.

There will be a private family ceremony in Maryland as Judith is laid to rest beside her husband, Zoltan G. Ambrus, the love of her life.  In lieu of flowers, donations may be made to the Smithsonian Museum.

"ALWAYS IN OUR HEART"

To leave a condolence, you can first sign into Facebook or fill out the below form with your name and email. [fbl_login_button redirect="https://cuocofuneralandcremation.com/obituary/judith-heinz-ambrus/?modal=light-candle" hide_if_logged="" size="medium" type="login_with" show_face="true"]
×