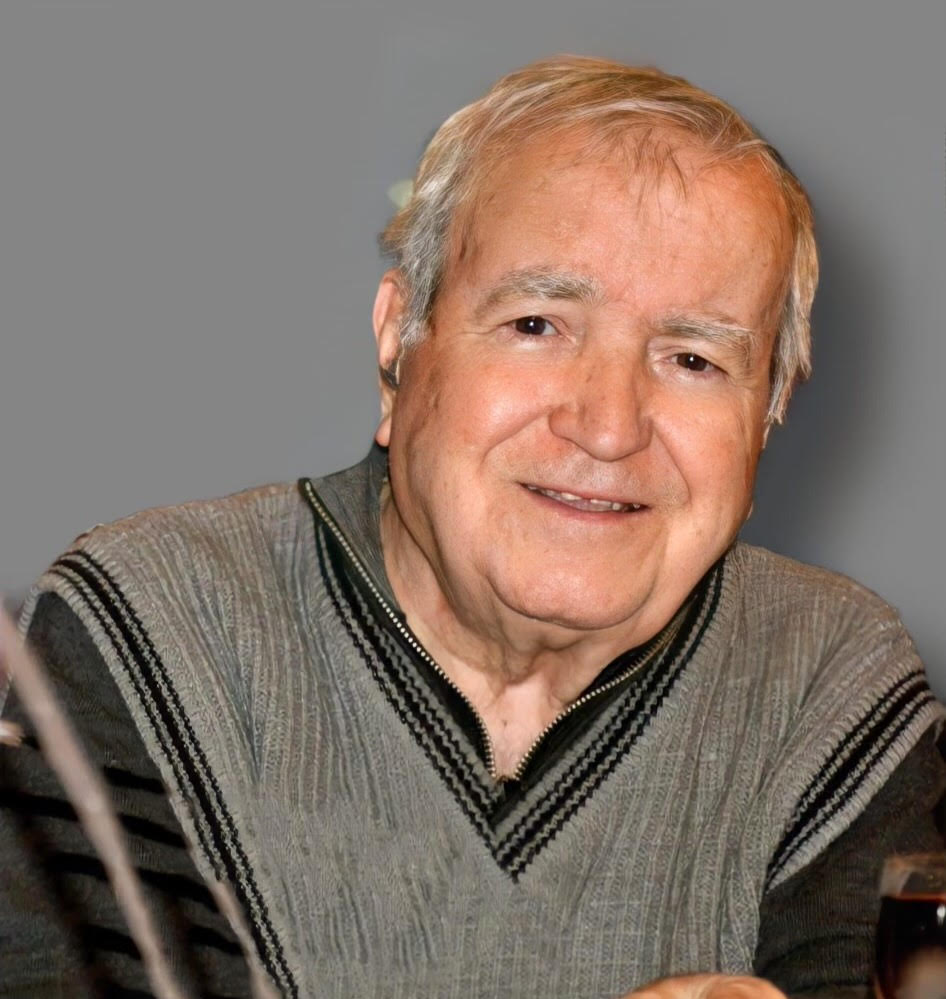 Joseph Scillieri, 94, passed away peacefully in his home, on September 3rd, 2022. Joseph, Joe, Pino-Nonno Scillieri, was born in Vittoria Sicily on January 26th, 1928. Son of Vincenza and Antonio.

The first of many words that come to mind when thinking of our dearest Pino, is Good. What an extraordinarily good man he was.
Patient, loving, and kind beyond comprehension, he was the definition of a hardworking, honest family man who was unapologetic for the capacity in which he loved his wife, children, grandchildren, food and soccer.

Pino and his beloved wife Antonietta (predeceased) were two peas in a pod. It would be impossible to mention one- without the other. In fact, for the majority of Pino’s life, he would often be referred to as Pino & Antoniette, or Nonna & Nonno. They were one.

The list of attributes worthy of mention is endless, however one that just tugs at our heartstrings has to be what a devoted loving husband he was. Pino and his wife shared the kind of love that most of us have only read about in books. He was the husband that every woman hoped theirs would live up to be. Several years ago, once his wife began having health problems, Pino never bat an eye, stepping up to take care of her. He cooked, cleaned, helped dress her, drove to every doctor’s appointment, and made sure she got to bed safe and sound; never without a kiss, all while helping to take care of his granddaughter Michelle.
What was even more impressive than his level of commitment was the way that he never complained, not even once.

As a teenager, when Pino wasn’t with friends at the beach or playing soccer, he was busy with an apprenticeship at a local barbershop. He spent years cutting hair between Sicily, Rome, Argentina, and here in America.

Pino was Hollywood handsome; with a smile that would melt a gelato from a mile away. Yet he didn’t find love until he was almost 27. Pino and Antonietta were introduced in Argentina, by Pino’s sister- who was always trying to fix the two up. Ironically, one day- while waiting for the bus, amid another one of his sister’s attempts, Antoniette had proclaimed that she would rather marry the next man to step off that bus than to ever meet her brother. From there, the rest was history, and they married shortly after in 1955.

While in Argentina, they grew their family of two, to four-with son Antonio (predeceased) and daughter Norma. Pino opened his own Barbershop, and earned the reputation for having “Hands of gold.”
In 1965 Pino moved his family to the United States, Paterson, New Jersey. At times, he worked three jobs to provide for his family, while never falling short of being a loving husband and father. When he wasn’t working, he was home with his family, or occasionally with friends; mostly watching the soccer games.
Years later, Pino and his wife followed their son Antonio to Atlantic City, where he would work at his son’s pizzerias. Those who have worked with him over the years remember him as being kind, and always pushing them to do their best; advocating a strong work ethic to build good character.
Pino quickly graduated from provider, husband, and father, to Nonno. A title he not only wore well but seemed to have been created just for him. And what a magical Nonno he was. He never lost his temper or patience and spent years pretending to love cartoons, just so that his grandkids could sit with him and watch. Pino never did anything without thinking about someone else first. He was such a selfless loving man, that in the winter on school days he used to drive from Absecon to Egg Harbor Township at 7 o’clock in the morning, just to drive his grandkids to their bus stop- which was only six houses away; to spare them from walking in the cold. That is the type of man he was.
He was what every little boy and girl deserved to have as a grandfather. His broken English paired with his famous Tweed Cabbie hats, and signature Nonno style sweaters- made him the picture-perfect grandpa.
When Pino wasn’t busy doing really cute Nonno stuff, he was eating, or watching a soccer game. He somehow always knew who was playing and what the score was. Before his nephew- and best friend, Sergio died- they were inseparable. When they weren’t together watching a game, they were ringing each other after every goal. When he lost Sergio in 2013, a light in Pino had forever dimmed.
Pino spent the final years of his life being his wife’s caregiver. The two were so perfect together yet, couldn’t have been anymore different. Pino was more low key, and while he may not have been the most talkative one in the room, anytime he spoke you wanted to listen. He was so effortlessly old school, Italian cool. Keeping it all the way real, all the time. A true OG. Watching him and his wife banter often made you want to pull up a chair with a bag of popcorn, they deserved their own show. After 65 years of marriage, every afternoon while on the couch watching TV, together they sat hand in hand as they did when they slept. How lucky were they to have known that kind of love.

The last five years really broke Pino. After losing his son Antonio, a piece of him was lost along with him. And just three short years later, his wife Antonietta passed away.

A broken heart was without a doubt the culprit in his rapid decline in health. He moved back into his Absecon home, where he would live out the remainder of his life, while his daughter Norma continued to take care of him. So much loss in so little time, will hollow the heart.
Losing our dear Pino, feels like an end to an Era. And with a great deal of certainty; we can say there will never be another person like him, capable of that much selflessness and love. May we honor his memory by being more patient with the people we love, run toward sacrifice, not away from it, and to always put family first. While we mourn the loss of a great man, we can’t help but smile knowing that our sweet Pino found his way back onto that same bus (although this time, with a slightly different route) but nonetheless reunited with the love of his life, Antonietta.

A celebration of life will be held at a later date

To leave a condolence, you can first sign into Facebook or fill out the below form with your name and email. [fbl_login_button redirect="https://cuocofuneralandcremation.com/obituary/joseph-scillieri/?modal=light-candle" hide_if_logged="" size="medium" type="login_with" show_face="true"]
×